Quote from the web page:
“A collection of Reports on UFO and Flying Saucer Sightings, Explainations [sic], and Theories which have been published in the Australian press.

Quote from the UFO report:
“This chronology is currently a 20-page report. I want to thank all the members of the A-Team who made this possible. Finally, but certainly not least, I want to thank Loren Gross for thoughtfully and diligently collecting data many years ago for his UFO Histories and supplemental notes, in particular here the year big thanks to CUFOS and Mary Castnor for housing them on the CUFOS site …

Feb. 9 (not 10th), 1951; off ,
On the night of the UFO encounter, a four engine Navy R5D transport was flying west over the . On this trip the 30-year-old pilot was bringing two flight crews home from special duty in . Including his own crew there were over twenty-five pilots, navigators and flight engineers aboard the transport. The National Archives turned up a number of supporting documents on this case, including Air Intelligence Information Reports by five of the crew members. Although it isn’t documented, reports indicate the object was tracked by ground radar. (NICAP, BB, Dan Wilson)

Feb. 21, 1951; Bt. and (BB)
3:00 AM. The Incident #26 report describes the event in more detail. Lt. George Williams was piloting a Navy Fleet Logistics airplane cruising at . At first he thought the object was a ship and then called the copilot forward. Nine witnesses saw the object approach at terrific closing rate. It veered to their port side and hovered momentarily, then rose at extremely rapid rate and disappeared off their port quarter. Size was estimated at in diameter, flat elliptical or cigar shaped by side view and seemed to be producing a ring of red-orange exhaust all along the edge. (Jan Aldrich, Project Interloper report).” 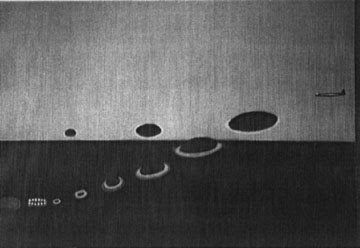