The B-50 airplane of the U.S. Air Force 509th Bombardment Wing flew over Fort Stockton, Texas at an altitude of 15500 feet when the photo was taken.

The UFO was sighted visually and registered on radar by the crews of both the aforementioned airplane and the B-50 that flew in the #4 position. 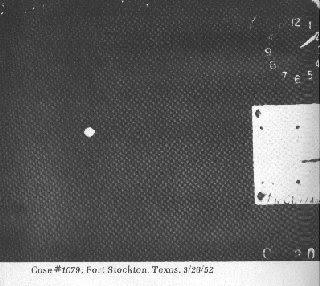