CTV Winnipeg presents a TV report about a Canadian government UFO document that was newly found in the Canadian National Archives.

The document, discovered by the Canadian UFO researcher Chris A. Rutkowski (interviewed in the TV report), is titled “CDS BRIEFING ON UNIDENTIFIED FLYING OBJECTS.”

The creator of the document (dated: 15 November 1967) is Wing Commander D. F. (Douglas Furg) Robertson of the Canadian Forces. 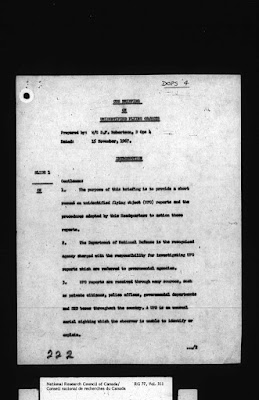 UFO Article (Blog):
“The Robertson Briefing: An inside look
at how one government viewed UFOs”

Chris A. Rutkowski reports on a Canadian government UFO document he newly found in the Canadian National Archives.

The document was created by Wing Commander D. F. (Douglas Furg) Robertson of the Canadian Forces.

Quote from the article:
“And since these unexplained cases involved physical evidence, reputable and highly trained witnesses, and even military and police investigations, these were the kind of cases that would have challenged the scientific community and demanded further attention.”