Carter’s UFO sighting occurred before he was about to give a speech at a Lions Club meeting in Leary, Georgia.

From Timothy Good's book, "Above Top Secret": “During his election campaign of 1976 he told the following to reporters: It was the darndest thing I've ever seen. It was big, it was very bright, it changed colors and it was about the size of the moon. We watched it for ten minutes, but none of us could figure out what it was. One thing's for sure, I'll never make fun of people who say they've seen unidentified objects in the sky. If I become President, I'll make every piece of information this country has about UFO sightings available to the public and the scientists.”

Below, you can see Carter relating his story of the UFO sighting on Larry King Live, CNN:

In this video, Carter is asked if he felt he had achieved his goal of opening up the U.S. government’s UFO files: 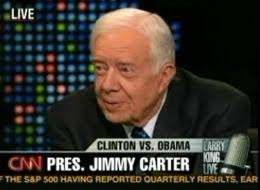