Billy Cox reports on the 25 April 2013 Aguadilla (Puerto Rico) UFO video (filmed by a DHC-8 Turboprop under the command of U.S. Customs and Border Protection). 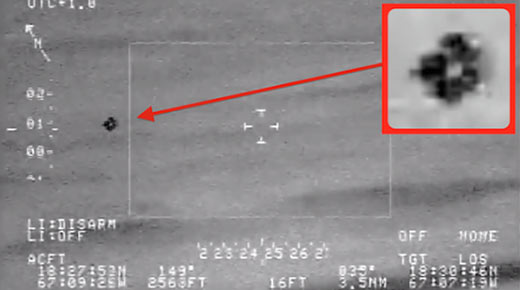 Quote from the article:
“The file is NAA file series J229, control symbol 5/13/AIR, barcode 21290309, with an interesting date range of 1956-1966. The file is held in the Brisbane office of the NAA and its current status is ‘Not yet examined.’ It’s title is simply ‘Sighting of Unidentified Objects.’ It originated with RAAF No. 10 Squadron, based at Edinburgh, South Australia. Why it is held in Brisbane is a mystery to me.”

Quote from the article (the text in italics comes from U.S. military documents):
“The question, which I have grappled with previously, is a one of terminology. Is the term ‘UFO’ a ‘catchall’ for anything unknown and flying? One would ask, why wouldn’t military personal simply use terminology like ‘unknown helicopter’ or ‘unidentified aircraft’ or ‘suspected flak’? The fact of the matter is, they often did. Interestingly though, these more routine terms occurred alongside with, and distinct from, the term ‘UFO.’ But, without more information, we just don’t quite know what fits into the ‘UFO’ basket and what doesn’t. It has been argued that ‘UFOs’ reported during the Vietnam War must have all been North Vietnamese helicopters. With this in mind, it is worth highlighting a United States Army ‘Daily Journal’ entry which was found in the records of the 23rd Infantry Division’s Chu Lai Defense Command. Dated January the 6th, 1969, it says:

‘Twr 72 rpts object flying into their area about 700m infront of them, AZ 310°. Object came in slow over the ASP & landed. When object moves it has a glowing light. It is about 15 – across. It is shaped like a big egg. Control twr rpts their radar did not pick anything up. Object also does not seem to have any sound to it when it moves.’

‘During Feb, there were 173 Unidentified Flying Objects (UFO) Sightings.’


On Page 27, there is another entry regarding UFOs, and it applies to the month of April, 1969. It is important here to note that there appears to be a mistake in the author’s text. Instead of correctly listing April as the time period being discussed, they have written March. As I said above, March had already been covered with its apparent 190 sightings. To quote exactly, it states:

‘During Mar, there were 46 UFO Sightings.’

‘During the entire reporting period, concerted efforts were made to identify UFOs. Further discussion of these efforts is precluded by the classification of this report.’

‘Current action on UFOs was initiated in Nov 68 when the 4th Inf Div requested a Restricted Flying Area/Defense Identification Zone in order to aid in the identification of unidentified flying objects. In early Jan message was received from COMUSMACV directing that HAWK acquisition radars would be furnished by the 6th Bn 56th Arty, to aid in UFO detection and identification. On or about 25 Jan the following radars were received accompanied by operating personnel: (1) Pulse Acquisition Radar; (2) Continual Wave Acquisition Radar; and (3) Illumination Radar. These were placed in operation the night of 31 Jan with the radar CP located at LZ Oasis. The Air Force provided a liaison officer at the CP. Presently, the Air Force and the 4th Inf Div are gathering data for analysis; the Air Force will not grant engagement clearance while objects are in the air as positive identification as hostile has yet to be determined.’

‘Another facet of target identification involved confirming the many visual, radar, and infrared sightings. No ‘hard evidence’ such as photographs or wreckage was obtained. On three successive August nights, RF–4s flew a total of 12 sorties against 34 radar–plotted UFO targets. The photos showed no helicopters despite several runs which, according to the radar, passed directly over the targets. On 28 August, an RF–4C using photo flash cartridges ran controlled tests to photograph a friendly helicopter at night. Of 38 exposed frames made on four passes, only two frames showed the helicopter. The summary of results to the 7AF Command Section said…’

‘This test confirms previous opinion by DOCR that chances of photographing one of the UFOs in the DMZ is extremely remote… …Even the two successful exposures required last minute flight correction by a DOCR representative riding in the lead helicopter.’

‘Two special projects were established to observe the UFOs from Con Thien, the highest hill in the eastern DMZ area. The primary mission of project HAVE FEAR did not concern the helicopter reports, but this Air Force Weapons Laboratory project had laser range finders and night observation devices (NOD) that offered some chance of identifying the sightings. HAVE FEAR personnel saw red lights and got video blips. The UFOs usually traveled at speeds from 30 to at altitudes from 1,200 to . After several days of tracking, the red blinking lights would extinguish when under HAVE FEAR surveillance. The project ran from 4–12 August 1968 and resumed from 18–31 August.’

‘In mid-August, HAVE FEAR was joined by Project LETHAL CHASER, which used manpack radar. From 18 August through 3 September 1968, the several observation systems conducted a joint, integrated search that also employed Waterboy radar. The criteria for a valid track included the UFO being within of Con Thien, being unidentified by Jazzy Control, having a track of at least two minutes duration, and traveling at less than . This joint effort got 67 valid tracks, but no conclusive identifications.

By late August, the helicopter situation dwindled away into occasional sightings and little new technical data. Several times the peculiarities of the tracks and the lack of confirmation where expected (such as from troops in the plotted area) defied adequate explanation. The 7AF Commander decided the results could not justify continuing the projects and MACV concurred.’

‘An additional function mentioned in this report was that of monitoring UFO reports. Information was relayed from forward observation posts through counter-battery intelligence channels to the FSCC, where the liaison team gathered all necessary information into the proper format and passed it on to the appropriate air defense agencies.’ ” 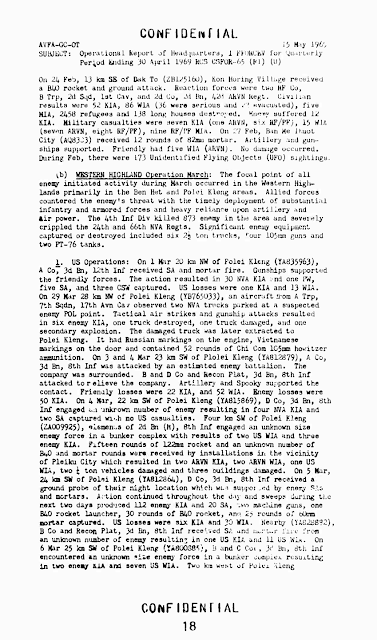