This UFO documentary film deals with how various world governments and world leaders have treated the UFO phenomenon through the years:

Photo taken during Ronald Reagan's "alien threath" speech to to a full session (42nd) of the General Assembly of the United Nations on 21 September 1987
Lagt inn av Blogger kl. 23:07

Martyn Stubbs (secretnasaman):
“A sequence from NASA mission STS-61, showing UFOs zooming by Hubble spacewalkers on the left and right side of the picture.”

In this video one can see several unknown objects which fly very close to the Hubble Space Telescope (HST).

What’s remarkable is that the NASA officials apparently aren’t concerned about the objects at all. One would expect that if these objects were dangerous pieces of Space debris that they then at least would mention the objects.

The most interesting unknown object is seen at 2:23 minutes into the video. An object suddenly appears near the astronaut and flies to the left before it accelerates away:

Excerpt from the report:
“Results in Brief (second paragraph): In our search for records
concerning the Roswell crash, we learned that some government
records covering RAAFactivities had been destroyed and others
had not. For example, RAAF administrative records (from Mar.
1945 through Dec. 1949) and RAAF outgoing messages (from
Oct. 1946 through Dec. 1949) were destroyed. The document
disposition form does not indicate what organization or person
destroyed the records and when or under what authority the
records were destroyed.” 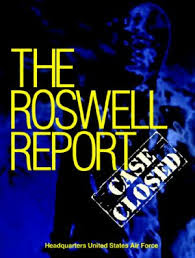