A UFO flap occurred in the area between Spokane, Washington and Coeur d’Alene, Idaho in March and April 1994, according to this Sightings TV report:

The first UFO sighting in the area was made on 2 March 1994.

The episode contains footage of a UFO which was filmed over Post Falls, Idaho.

There also were several cattle mutilations in the area during the time of the UFO flap, according to Sightings host Tim White.

Reporter Jaime Maussan presents the UFO footage that recently was filmed by a Sky News (UK) film crew near the Eyjafjallajokull volcano in Iceland:

Maussan also presents several other compelling UFO footage (and photographs) that were filmed over active volcanoes in Mexico.

The best volcano UFO footage that has been recorded in Mexico was filmed by TV cameraman Francisco Guzman over the Fuego de Colima volcano in 1987. This UFO footage can be seen at 2:23 minutes into the video.

NOTE: The UFO video by Francisco Guzman was recorded in 1987, and not during the 1998 eruption of the Fuego de Colima volcano. 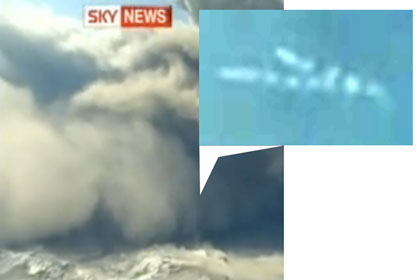 Francisco Guzman filmed a UFO near the Fuego de Colima volcano, Mexico in 1987