John Powell, a retired school teacher, managed to photograph a UFO, which chased an RAF Hercules airplane that was about to land at RAF Lyneham in Wiltshire, UK on 22 July 2009 at 3:45 p.m.

Powell sighted the unknown object while he was gardening. The sun was glinting off the UFO, according to Powell:

A Ministry of Defence spokesman said: "The MoD examines reports solely to establish whether UK airspace may have been compromised by hostile or unauthorised military activity. Unless there is evidence of a potential threat, there is no attempt to identify the nature of each sighting reported." 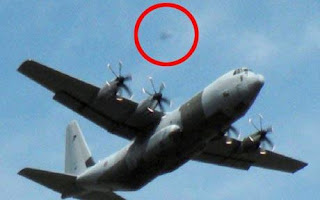