The movie was broadcasted by the U.S. American Movie Classic (AMC) Cable Channel on 18 March 2004:

The unknown object seems to be oval shaped.

This Korean War movie was produced by Twentieth Century Fox. The movie was released in February 1961 (U.S.).

The UFO footage was recorded near Bakersfield, California, according to Ed Sherwood, the video source,

And the UFO footage must likely have been recorded either in 1960 or in early 1961, since the movie was released in February 1961. 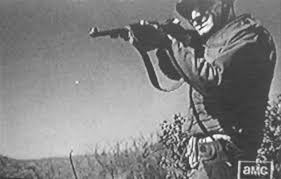