'Popular Mechanics' has Found
the Truth Behind NASA's "UFO" Videos!

'Popular Mechanics' has found the truth about UFOs.

They aren’t UFOs. They are “UFOs”.

'Popular Mechanics' article by Erik Sofge:
“Footage in the Sky: The Truth Behind NASA's "UFO" Videos”:

And be sure to read the above article’s reader comments. 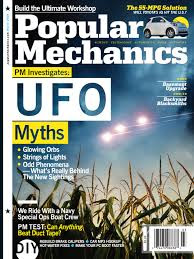 Why didn't 'Popular Mechanics' include the below NASA TV video link (posted on this blog earlier) in their article? This video footage shows several UFOs which are suddenly slowing down and changing their flight directions near the Russian Mir Space Station:

The 'Popular Mechanics' writer didn't include the above video in the article, because he wouldn't have been able to explain away the unknown objects and least of all their movements!

How can 'Popular Mechanics' know the truth about the NASA TV UFOs when (to my knowledge) no one else does?

This blog is reporting only on UFO footage or evidence recorded or obtained by any media or government source. All I know is that something is going on.

Just read some of the U.S. government FOIA UFO documents which are found in The Black Vault. And then we have the other evidences, that have been collected by civilian UFO organisations and researchers, which clearly show that unknown objects fly in (and above) the Earth’s atmosphere.

Would the U.S. government (and other governments) spend so much money, human resources and precious time investigating something that didn’t exist?

In the below article, Billy Cox exposes PM’s UFO agenda.