This UFO documentary outtake is very interesting. Harold Brown, U.S. Secretary of the Air Force and Dr. J. Allen Hynek (Astronomer) were interviewed after the public UFO Hearings that were held by the U.S. House Armed Services Committee on 5 April 1966(http://www.project1947.com/shg/symposium/shgintro.html).

Both men denied that the U.S. Air Force was hiding UFO secrets from the U.S. public.

First we see how Dr. J. Allen Hynek responded as the U.S. Air Force's scientific adviser on the subject of UFOs, when he was interviewed after the 1966 UFO hearings. Then, in the second Hynek interview (1985), which was conducted many years after Hynek had left his job at the U.S. Air Force, we are told how the inner machinations within the U.S. Air Force worked regarding the UFO phenomenon:

“I know the job they (the U.S. Air Force) had. They were told not to excite the public. Don’t rock the boat. I saw it with my own eyes how whenever a (UFO) case happened that they could explain, they made a point of that and let that out to the media. Cases that were very difficult to explain, they would jump handsprings to keep the media away from (them). They had a job to do, whether rightfully or wrongly, to keep the public from getting excited.” 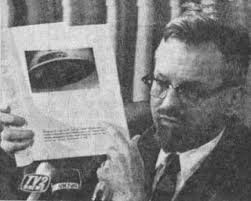