This issue focuses on the question of tampering (by the U.S. Air Force) with the 15 August 1950 Nicholas Mariana UFO film.


Quote from the article:
“CONCLUSIONS – A few more things are now more certain about the Great Falls UFO footage than they were before:

1) In spite of the Air Force’s claims to the contrary, there is strong evidence that the film sequence was clipped after it had been sent to the Air Force in 1950. Witness statements and Air Force documents allude to a longer sequence than currently exists.” 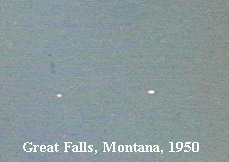