This UFO TV report deals with the UFO sightings that occurred over Ohio and Indiana in July 1996:

The late Kenneth Harold Young was a graphic designer, producer for the Telecommunications Board of Northern Kentucky, MUFON State Section Director and UFO researcher. He produced several ‘UFO Update: LIVE!’ and ‘UFO REPORT’ TV reports that were broadcasted on Midwest (Kentucky, Ohio and Indiana) cable TV channels between 1991 and 2004. 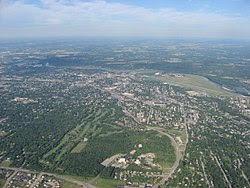 Several Trumbull County, Ohio residents began reporting UFOs on 14 December 1994. And many of the Trumbull County police officers who investigated the case also saw (and chased) the UFOs.

And this is a must-hear interview if you're interested in how the mainstream media (MSM) companies treat the UFO issue.

The show is hosted by Art Bell: