Quote from the article:
“At least 20 UFO sightings have been reported in the past month (July/August 1975) throughout this country. They have been seen hovering, blinking, scooting sideways and up and down. One reportedly emitted an odor comparable to sea water.

Policemen have sighted the UFOs and chased them unsuccessfully. Two midnight motorist swore they were followed  by one. A salesman said one hung over his house, glaring with a light which ‘paralyzed’ him and sent his cat screeching.

The UFOs have been described variously as ‘twice as big as the setting sun; very bright and orange in color; big as a house with red and green lights; white, sort of cigar-shaped.’

There has been one parliamentary call for an official inquiry into the UFOs. A police spokesman said, ‘we can offer no logical explanation for them,’

A (the capital) air traffic controller pooh-poohed the sightings, declaring, ‘to say we are skeptical is an understatement.’

The UFOs spotted one night flashing green, red, blue and yellow lights over , he said, were two helicopters. The orange colored object spotted, he went on, was probably the moon. No UFOs had been picked up on ’s air traffic radar, he added.

Whereupon an ex-Spitfire pilot said the controller was talking rubbish.

The pilot and several members of his family had sighted a UFO over his house, he swore, a white and orange affair.

And as an ex-pilot, he snapped, he could certify the UFO was not a helicopter—or the moon.” 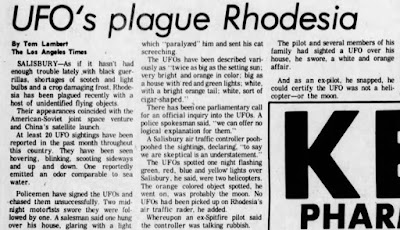