Albuquerque Tribune reported that the unknown object which was sighted on 5 August 1952, 7:30 a.m., was seen by hundreds of people. 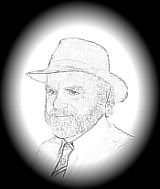