Quote from the article:
“Recently, in Part 1, Part 2, Part 3 and Part 4 of this series, I have highlighted the use of the US military’s OPREP–3 system to report apparent UFO events which have occurred over military installations, and, in air defence environments. OPREP–3 is short for ‘Operational Reporting – one of a number of distinct categories of operational report channels. A December, 1993 dated Instruction, titled ‘Joint Reporting Structure Event and Incident Reports,’ and promulgated by the Chairman, Joint Chiefs of Staff (CJCS), establishes that:

‘The OPREP–3 reporting system… …is used by military units at any level of command to report significant events and incidents to the highest levels of command.’

As I have previously outlined in this series, both Loring AFB and Wurtsmith AFB were, in late 1975, the scene of unusual and unexpected ‘over flights’ or ‘intrusions’ by objects variously described as ‘unidentified helicopters,’ ‘unknown helicopters,’ ‘unidentified flying objects,’ ‘unknown objects’ and ‘UFOs.’ Both these bases were under USAF Stratigic Air Command (SAC) control, and both held nuclear weapons. These events were reported, via the OPREP–3 channel, to the National Military Command Center (NMCC), the Strategic Air Command Headquarters (SAC HQ), the Chairman of the Joint Chiefs of Staff (CJCS), the USAF’s Major Command Coordination Center (MCCC), the North American Aerospace Defence Command (NORAD), the USAF’s Air Force Intelligence Service, (AFIS), the 8th Air Force’s Headquarters (8AF HQ), and a number of other components within the US military and intelligence community. Also, other SAC bases, including Malmstrom AFB and Minot AFB, plus Canada’s Falconbridge Air Station, were likewise intruded on by unidentified aircraft, or, at minimum, some sort of unusual phenomena. As the months went on into 1976, other USAF installations, including Fort Richie AFB, Cannon AFB and Eglin AFB were the scene of similar aerial disturbances. Judging by tantalising references in officially released records, there may have been similar events at other US military installations too.

In this Part 5, I will be highlighting never–before–seen US military documents which demonstrate, unmistakably, a considerable level of investigation done into the 1975 ‘over flights.’ I will not attempt to assemble the entire investigative history that was performed by interested commands and agencies, as such an undertaking would probably require a book–length treatment, and, many of the documents involved remain classified, or, will have been presumably destroyed. Rather, I will present, and briefly discuss, a mixture of records which simply provide a snapshot of government UFO investigation, evaluation, and very high level concern.” 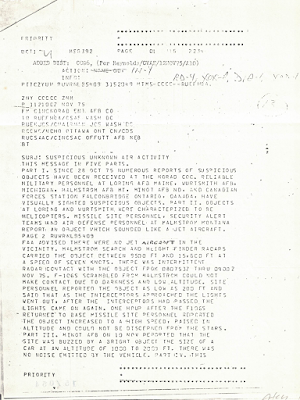 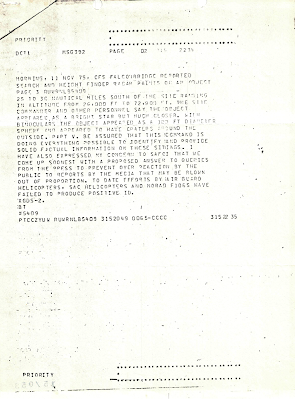 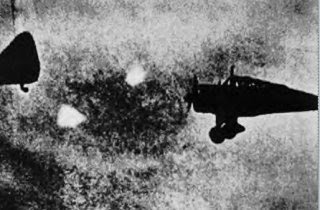 Police officers from Tilton, Guilford, Belmont and the Belknap County Sheriff’s Office said they spotted the UFOs beginning about 3:30 a.m. in the Sanbornton area around Interstate 93.

Tilton police officers Mike Alden and Mark Paine were the first to report seeing the UFOs and called for other units to respond to the scene.

Alden said the UFOs responded to the officers by their movements and flashing lights when the lights on his cruiser were turned on and off.

There were eventually three UFOs that formed a triangle with the cruisers in the middle and a fourth rose from the woods in front of them and then headed off with a high rate of speed, he said.

Alden said all the objects left the area about .m. and that they moved as close as to the officers.” 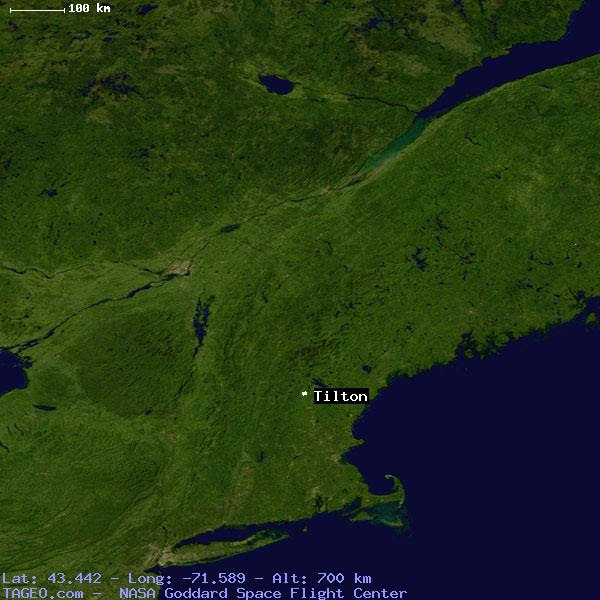