The U.S. politician who deserves most credit when it comes to the UFO issue is former U.S. President Gerald R. Ford (Republican). In 1966, while Ford was a Representative for Michigan and U.S. House of Representatives Republican Minority Leader, he managed to get the House Armed Services Committee to hold a Congressional Hearing on UFOs on 5 April 1966. 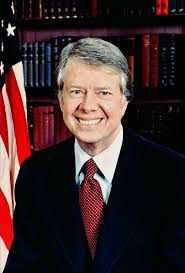 The U.S. Air Force and other U.S. government departments/agencies claim time and again that they haven’t investigated a single UFO case since 17 December 1969.

This issue is no longer being investigated by the Defense Department. As you may know, the United States Air Force began investigating UFOs in 1948 under a program called Project Sign. Later the program's name was changed to Project Grudge, and in 1953 it was changed again to Project Blue Book. On December 17, 1969, the Secretary of the Air Force announced the termination of Project Blue Book.

The decision to discontinue UFO investigations was based on a number of factors, including reports and studies by the University of Colorado and the National Academy of Sciences, as well as past UFO studies and the Air Force's two decades of experience investigating UFO reports.

As a result of these investigations, studies, and experience, the conclusions of Project Blue Book were:

* No UFO reported, investigated, and evaluated by the Air Force has ever given any indication of threat to our national security.

* There has been no evidence submitted to or discovered by the Air Force that sightings categorized as "unidentified" represent technological developments or principles beyond the range of present-day scientific knowledge.

* There has been no evidence indicating that sightings categorized as "unidentified" are extraterrestrial vehicles.

All documentation regarding the former Blue Book investigation was permanently transferred to the Military Reference Branch, National Archives and Records Administration, 8th and Pennsylvania Avenue, Washington, DC 20408, and is available for public review. A list of private organizations interested in aerial phenomena can be found in Gale's Encyclopedia of Associations, available in the reference section of many libraries. Air Force Fact Sheets on this topic may be viewed, including one about the so-called Roswell Incident . The Naval Historical Center has compiled a bibliography."

But if you click on the below web links, you’ll see that the U.S. government in actuality hasn’t stopped investigating UFOs post 1969.

The text in the U.S. government document pertaining to the 1976 Iran UFO case, which can be found at the below links, shows that it was received by the U.S. Air Force, Washington, D.C. (Pentagon) and other main U.S. government departments/agencies:

The three above web links have been posted on this blog earlier.

And the U.S. Government has also investigated many other UFO cases since 17 December 1969.
Lagt inn av Blogger kl. 23:22