A Spanish TV show that presents UFO videos which have been released by the Chilean Military has caused a stir on the Web in recent days; but the Cuarto Milenio TV show presented "OVNIs en Chile" already in 2007.

Some people have questioned the credibility of these UFO videos, but Cuarto Milenio is a serious TV show. And the guest on the show is Juan Ignacio Lorenzo Torres (himself a UFO witness), who’s a former Spanish Air Force Commander. Therefore, it’s highly unlikely that Cuatro, the TV channel, would have presented UFO videos which aren’t 100% authenticated by the Chilean Military:

But if the videos were proven to be hoaxes, I’ll write about it on this blog!

The video at the below link shows several NASA communication transcripts and Commander Frank Borman’s “Bogey” audio message that prove that NASA’s astronauts encountered UFOs time and again in Space.

This video also gives an overview of Project Gemini. This was the NASA project that preceded Project Apollo:

The UK Ministry of Defence (MoD) presents UFO case reports from the years 1997 through 2009, showing dates and times, location and a brief description of the sighting:

How to report a UFO sighting to the MoD:

The Freedom of Information (FOI) Act and MoD: 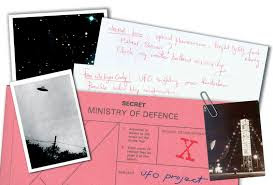