The segment focuses on the “green fireball” incident case reports that are contained in a 209-case (cases run from January 1946 through May 1950) catalogue that originated at New Mexico’s Kirtland Air Force Base (17th District, Air Force Office of Special Investigations (OSI)). The Air Force entirely eted two columns on the chart: “Reliability of Observer” and “Evaluation.” The censorship was performed in the late 1970s, according to the book!

The catalogue’s selection of conclusions are as follows:
“ is “Green Fireball Phenomena,” “ is “Disk or Variation” (!) and “ is “Probable Meteor.”

The “Disk or Variation” conclusion is curious, the book says—because during the Project Grudge era, “flying disks, or saucers, officially did not exist.” 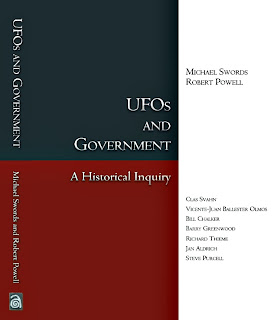