Dozens of Air Force pilots sighted the UFOs over the Pori air field, according to this UFO documentary film (“Visitors from Space”). As fighter jets approached the UFOs, they started to ascend in formation and took off at a tremendous speed towards the north. They flew against the wind at a speed of 120mph.

Fighter pilot Tarmo Tukeva was ordered to fly towards these unknown objects. The UFO spheres had a light yellow colour, according to Tukeva. Tukeva’s fighter jet flew with a speed of 400mph, but the UFOs outdistanced the fighter jets and disappeared to the north. Tukeva couldn’t come up with any conventional explanation for this phenomenon.

This documentary segment can be seen at the start of the video: 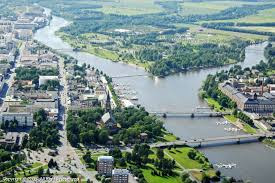 Comment by the video source:
“This is a report on the surge in sightings in and around Liverpool and is from the latter part of 2008. There is some very interesting footage that it shows at the beginning. It represents what has happened all over the country in 2008 and continues through 2009.”

Comment by the audio source: “BBC Radio Leeds talk to UFO DATA Magazine editor, Russel Callaghan, about the latest release of UFO files from the British Ministry of Defence.”