The document pertains to the 9 February 1951 Lieutenant Graham E. Bethune UFO incident. Bethune was the pilot of the R5D Navy transport airplane.

The document was sent from Naval Station Argentia, . 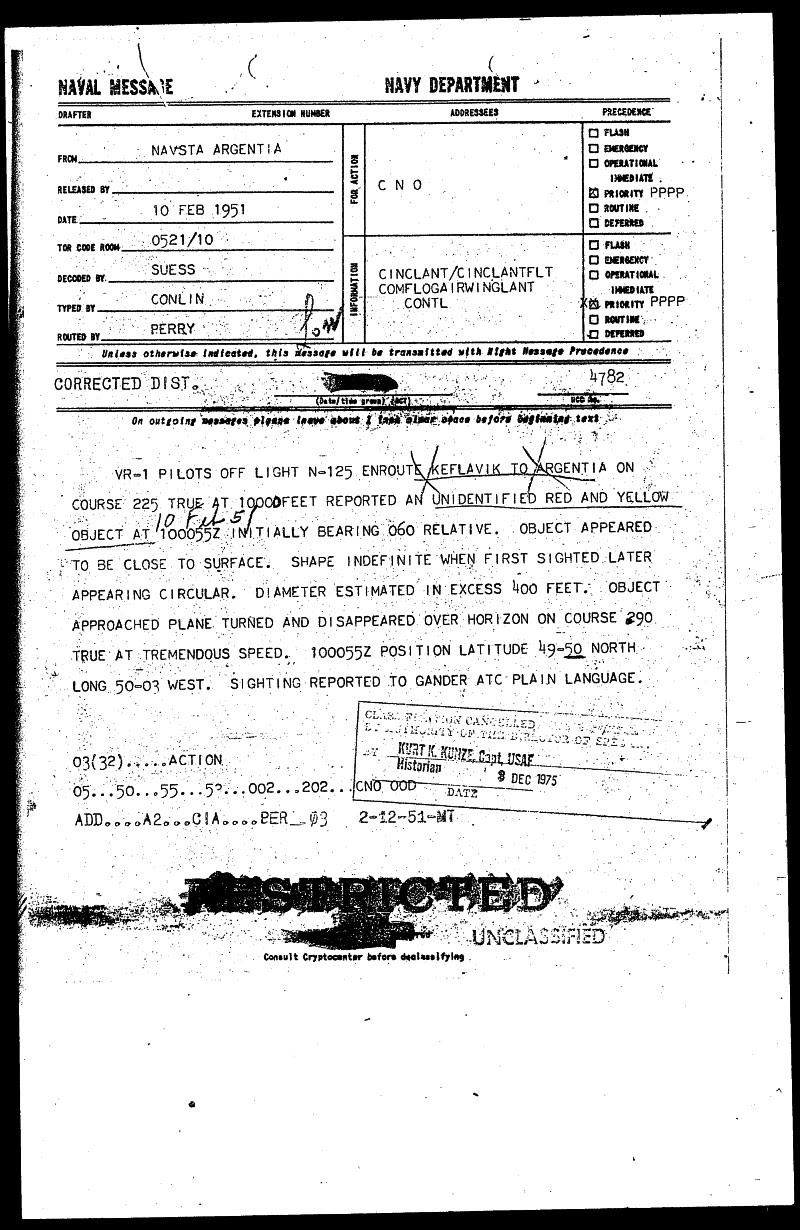 Fran Ridge:
Feb. 9, 1951; Off ,
(0055 Zulu is Feb. 10th) 9:55 pm local (Feb. 9). A four engine Navy R5D transport was flying west over the . On this trip the pilots and navigators were bringing two flight crews home from special duty in . Including his own crew there were over twenty-five pilots, navigators and flight engineers aboard the transport. Bright indefinite object first sighted near ocean surface at 060 relative, then became a ring which had a close encounter with the transport. Object now circular estimated at in excess of 400' diameter, then turned and disappeared over horizon on course 290 at tremendous speed. The National Archives turned up a number of supporting documents on this case, including Air Intelligence Information Reports by five of the crew members. Although it isn't documented, reports indicate the object was tracked by ground radar. Publicly, the Air Force made several attempts to explain the sighting as the aurora borealis (northern lights) or the Moon, but behind the scenes the encounter was; being taken very seriously. The number and quality of UFO sightings in the region in 1950 prompted the government of to request military aid from the . Apparently what we know today as UFOs were interpreted as experimental Soviet bombers. After 50 years of waiting, no craft with this discription [description] or performance has shown up in any Earthly inventory, Russion [Russian] or American. This event, and others like it, prompted the development of the Air Defense Command. (James McDonald’s letter to NICAP shows was the weather navigator on that flight and mentioned another witness named Abrams. Another witness was Fred Kingdon who says Bethune was a co-pilot on his flight and that the AF investigation team at Argentia classified the incident as Top Secret. Finally, the final testimony of Graham Bethune was written by Robert Durant and is presented below in a doc file.) Major Donald Keyhoe had learned of this hidden report in 1959. Admiral Delmer S. Fahrney, former Navy guided missile chief (whom he had known for years) told him that Captain James Taylor, USN, Ret., had an important UFO sighting made by a naval pilot and his crew. That night gave him the report.

Richard Hall:
I must say that after reading the BB file, the notion that they saw the moon seems absurd. It is very clear that the object approached from one direction, then (a la Nash-Fortenberry) reversed direction at a very sharp angle and disappeared over the horizon in quite a different position. Quite an ‘illusion!’

Dan Wilson:
In par 10 of Bethune’s report he states that Capt. D.H. Paulson’s written and radar report was not on microfilm (meaning BB files I guess). So there may be a radar report.”

NICAP.org presents  government documents that pertain to the UFO case. 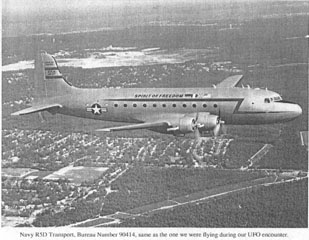