“In this case LIFE’s (magazine) informant is an Air Force officer who holds a top military post at a key atomic base. Since his assignment and whereabouts must be kept a secret he has asked LIFE to withhold his name. He has the highest security rating given. Before he took his present assignment, this officer was in command of the radar equipment that keeps watch over a certain atomic installation. One day in the fall of 1949, while watching a radarscope that covered an area of sky 300 miles wide and 100,000 feet deep, he was startled to detect five apparently metallic objects flying south at tremendous speed and great height. They crossed the 300-mile scope, in less than four minutes. The objects flew the whole time in formation.

There is no dead-certain explanation of this phenomenon -- radar is as full of tricks as an old – maid’s imagination. However, the officer involved is an experienced observer, well aware of the eccentricities of the instrument. He believes that in this instance he made a legitimate radar contact.

If so, it can be said that the only natural objects known to travel at such a speed are meteors, but meteors do not fly in formation. If the officer picked up machines, they were performing in a manner that rocket experts agree is still beyond the capabilities of [Earth’s] most advanced weapons.

By H. B. Darrach Jr. and Robert Ginna 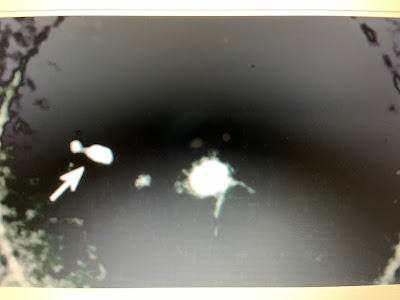 The 24 October 1968 Minot AFB, North Dakota, UFO incident: This U.S. Air Force photo shows the B-52 radar screen on which a blip of the UFO appears (Photo: abovetopsecret.com)