The whole UFO case report:
“11:00 PM. A high school girl was having her cousin [a beautician] over for a visit and a sleep-over. The two young women were still up when they heard a sound outside. Looking out their window, they saw an object above the field across the road. It was less than a mile away. The thing appeared to be a gray metallic disk, non-luminous, but with a orange-red band of light around the circumference. This light enabled the girls to see the shape clearly: like ‘a shallow inverted bowl with a curved bottom’. The object was ‘clean’ [no protrusions nor individual lights]. The object came directly over the farmhouse, its vibrations rattling the bedroom windows. [The parents were asleep already and did not awaken]. The girls felt that the disk was ‘the size of an automobile’ and was rotating counter-clockwise as it rose and sailed away. The next morning they told the one girl’s parents what had happened but were not believed. That morning however, the father was out walking the fields and came across a forty foot diameter circle of dried out soybean crop, which had not previously been there. This area was not only a ‘perfect’ circle but in the proper location for the sighting of the UFO. The appearance of the affected crop was ‘all of the leaves of each plant were hanging wilted from the stalks’ as if, the UFO field researcher hypothesized, ‘they had been subjected to intense heat’. The spot was apparently the result of a ‘near-landing’ rather than an actual touch-down, as the plants were not broken off nor crushed. A fine aerial photo of this circle has been made and is attached to this report. The UFO community was on the scene relatively early, with the APRO investigator taking the photos and soil samples, and Walt Andrus of MUFON/APRO interviewing the daughter [the only early interview of the cousin was by news persons]. As was almost universally the case APRO dropped the ball on the analysis of the samples and reported only that the plants were dry, shriveled, and not radioactive.  Dr. J. Allen Hynek even visited the site and was later quoted: ‘I still don’t know what the hell this thing is all about... It looked as though a big heater had been held six feet above the ground’. Neighbors of the family contributed the remarks that their dogs were making a racket that evening. Van Horne stands as one of the best ‘landing effects’ cases on record. This is because it has multiple witnesses, an immediate corroberation [sic] of the trace by someone who knew exactly the state of his farm fields, no desire for publicity [in fact a parent who blocked almost all of it], no motivation [in fact, a loss of valuable crop], multiple, early-on-scene investigators with good track records for straight-shooting, and a fairly large and mysterious effect. On some scales of rating ‘trace’ cases, this might be #1. [Mike Swords; References: a). APRO UFO Report Form (case field investigation), undated but c. September 1969 (Hynek/CUFOS files); ‘Saucer Near Landing In Iowa’, SKYLOOK #23, October 1969; ‘UFO Over Iowa Bean Field’, APRO Bulletin, July-August 1969: Kevin Randle, ‘The Iowa UFO Landings’, Official UFO Fall 1976; [news note] DATA-NET V(9): September 1971; Al Swegle, ‘Sight UFO Over Benton County Farm’, Cedar Rapids Gazette, August 15, 1969.]” 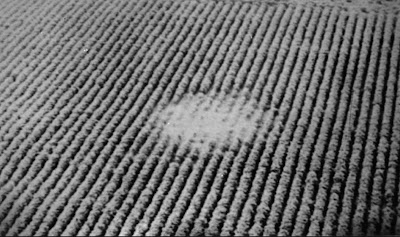 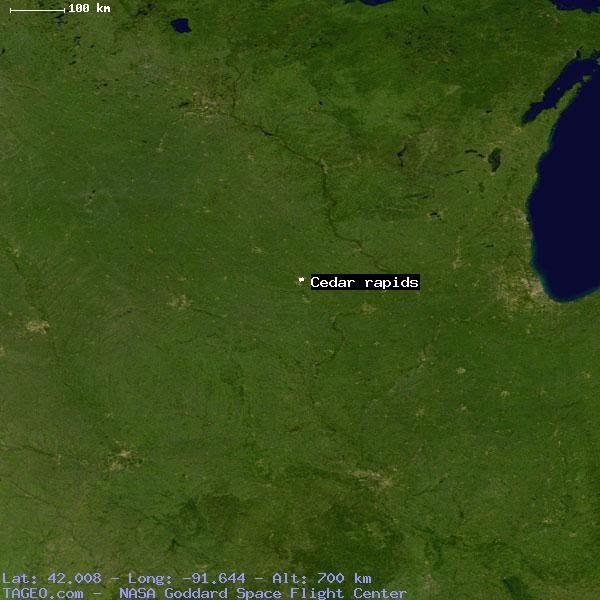 The whole article:
“Under any other set of circumstances, Warren ‘Bud’ Barr would say lightning struck his soybean fields the evening of Sunday, July 13 [1969].

While he was doing chores the following morning, the farmer noticed that a 15-foot circular area in his bean field had been charred to the ground. No other part of the field was touched.

At breakfast his 15-year-old daughter, Pat, and her cousin, Kathy Mahr, 19, gave him another explanation for the barren spot.

‘Kathy and I were about to go to bed at 11 Sunday evening, when we looked out our west window and saw red-orange lights hovering just a few hundred feet from the house,’ Pat recalled.

The black metallic object was moving and vanished over a neighbour’s field northwest of the Barr home. The object was about the same size as the barren spot in the soybean field.

‘I know that it wasn’t a jet, a helicopter, or a small plane,’ Pat said. ‘It was shaped like two saucers put together upside down.’

The Barr family doesn’t say that the object was from another planet. But their beans haven’t had any trouble with armyworms either.

It could have been lightning, Bud Barr believes, but he hasn’t tried to collect on his crop insurance. The family said the air was quiet around 11 p.m., although it had rained earlier in the evening.

When lightning strikes, the center of a circular area is usually barren, but the edges taper off, Vivian Jennings, area extension crops specialist, said. In Barr’s field, the whole 15-foot area was barren, and other portions of the field were not affected.

The family weren’t able to find any imprints in the area, and they did not report the strange activities to authorities.

Several citizens reported what they believed to be an unidentified flying object near the municipal airport in June. The municipal airport air traffic control tower has not had any reports of unusual activity on June 13, although they usually ask that citizens forward reports on to military authorities at Offutt air force base, , or Springs.

Two space flights since then have eliminated the theory that the object might have been sent from the moon or Mars. There isn’t any life on Mars, you’ll recall.

‘But it could have been from Venus,’ Pat said. ‘Imagine what their scientists would say if they thought earth was a giant soybean field.’ Pat is a senior at Benton Community high school.

The article contains a photo of Warren Barr’s soybean field.

NOTE: NICAP.org and other credible UFO research sources
report that Warren Barr’s farm was located just outside Van
Horne (located just west of ). Van Horne is
located to the south west of Vinton.

The whole article:
“Helen Kay says she saw a flashing object move slowly toward the earth Sunday night [2 November 1975], then apparently take off again into the sky.


‘It was about from the house and it disappeared behind one of the buildings,’ Mrs. Kay said. ‘When we got there it was gone. Then it appeared above the trees above the hill west of .’

Mrs. Kay said she and her daughter got into their car to follow the object.

‘It flashed red, green and white. I was surprised when it first came down. It was quite large and I’ve never seen anything like it.’

She said she first thought it was a flare, but became confused when she saw the object reappear in the sky.

is in southeastern , north of .”

The UFO case was covered in History Channel’s 1976 UFO documentary film, In Search of … UFOs (see below link). 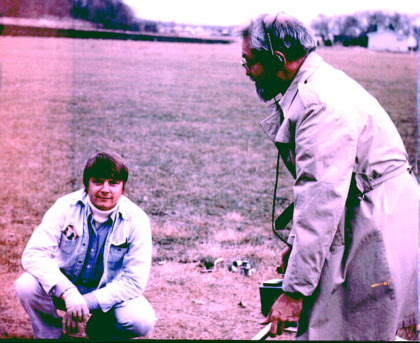 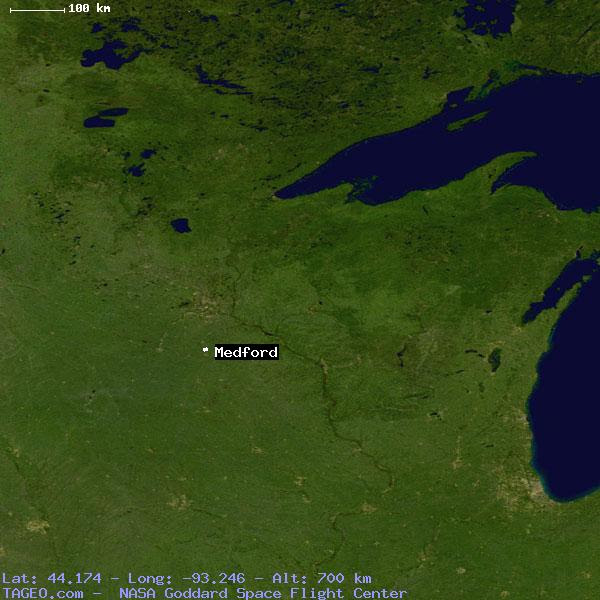