This is an article regarding the 30th anniversary of the Kenneth Arnold UFO incident:

Deseret News gives an overview of the history of the UFO phenomenon in the U.S. as of 1977. 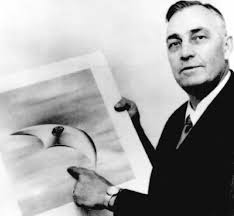 Kenneth Arnold shows an illustration of one of the UFOs he
saw while flying over the Cascade Mountains on 24 June 1947
(gstatic.com photo)
Lagt inn av Blogger kl. 22:55

Many Stanford residents sighted UFOs on this date, according to a Kentucky Advocate article.