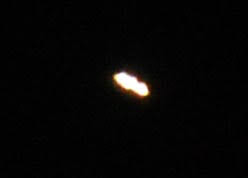 And the UFO photograph was corroborated by several other independent UFO witnesses, according to the IBN Live article:

The following Wikipedia article reports on several interesting UFO sightings that occurred over India during 2007:

In this footage one can see an unknown, pulsating object, which crosses the path of both the Space Shuttle (unknown STS mission) and ISS: