Quote from the article:
“Back in the olden days, while I was still in college and a member of Air Force ROTC, I learned that the Project Blue Book files were available for study and review at the Air Force Archives at the what was then called Maxwell Air Force Base. The announcement was made in an internal Air Force document, meaning, simply, that it was circulated inside the Air Force but not necessarily in the civilian world. It said that anyone who traveled to could see the material.

They eventually told us about a master index to the sightings. This master index gave the dates of the sightings, location, names of the witnesses and the Air Force conclusion. Cornett and I went through the whole thing and copied the information of all the unidentifieds, most of the photo cases, landing trace cases, and anything else that struck us as important. I didn’t know how valuable that information would become later.

In other files, they took the names out of the Air Force generated reports, but left the names in newspaper articles that were filed with the reports. In other words, in some cases, you can put the names back in.

But remember, Cornett and I copied the names from so many of the case files that I, too, can put them back in. In fact, in Project Blue Book – Exposed, Appendix B is a listing of those cases, including the date and time, location and the witnesses, along with a brief description of the sighting.”


The whole UFO case report:
“Richard Hall:
September 3, 1965; (BBU 9890)
1:30 A.M. While hitchhiking home in the early hours, teenager Norman Muscarello was terrorized by a large object with four or five bright red lights that approached from nearby woods and hovered over a field near the road. Horses spooked. He went to the police station, pale and shaken, and reported the incident. Officer Eugene Bertrand drove him back to the field to investigate. About an hour earlier Bertrand had come across a woman parked on Route 101. ‘She was real upset,’ he said, ‘and told me that a red glowing object had chased her.’ When he was called to investigate Muscarello’s report, the earlier incident caused him to pay attention. At first Bertrand and Muscarello saw nothing, but when Bertrand flashed a light around the field, a huge dark object with red flashing lights rose up over the trees, moving back and forth, tilted, and came toward them.

The A-Team:
All one needs to do is to read the actual interviews of Bertrand, Hunt, and Muscarello to dump this newest ‘explanation’ (*) into the garbage where it belongs. The ‘new’ theory is laughingly preposterous. Reported facts: 1). The brightness of the lights. So bright that the whole house was bathed in red; so bright that the shape of the object was obscured, but Bertrand could see that there WAS some sort of object uniting them; so bright that they feared that they would be BURNED by them and so ran from them. 2). All the main observers say that the lights were at ANGLES at various times during the flight, and wobbled during the flight as well . 3). Object/Light-line changed from ‘Quarter-at-arm's-length’ to ‘Grapefruit-at-arm's-length’ during the few minute sighting. The light-line also flew flat, then dipped at reasonably sharp angle, then rose at an angle again as it proceeded across the sky. And, when Betrand first became involved, they could not see any object, went down into the field, i.e. closer to the treeline than the road, and the object STILL rose up ‘suddenly’ over those trees. 4). Bertrand saw the object go from quarter to grapefruit apparent size as said. In doing so he had a bit of data which might give him SOME idea as to how distant it was. He said that it ‘maneuvered’ around a tree circa away.  [The investigating officer at Pease wrote in his report that Pease had 5 B-47s in the air ‘but do not believe they had any connection with this sighting.’] Finally, the animals weren’t just noisy. (Ridge, Waskiewicz, , Swiatek, , Fowler, Ledger, Swords, Maccabee, Rodeghier)

Bertrand:
‘Yeh, you could hear them neighing and kicking in their stalls. Even the dogs around here started howling. When Dave arrived, the three of us just stood there and watched it. It floated, wobbled, and did things that no plane could do. Then it just darted away over those trees toward .’ ” 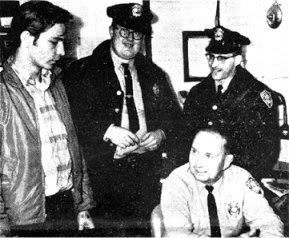 
The UFO (a large, silent, dark, elliptical object with a row of 5 bright red lights) was observed by Exeter Patrolmen Eugene Bertrand, Jr. and David Hunt, and civilian Norman Muscarello. 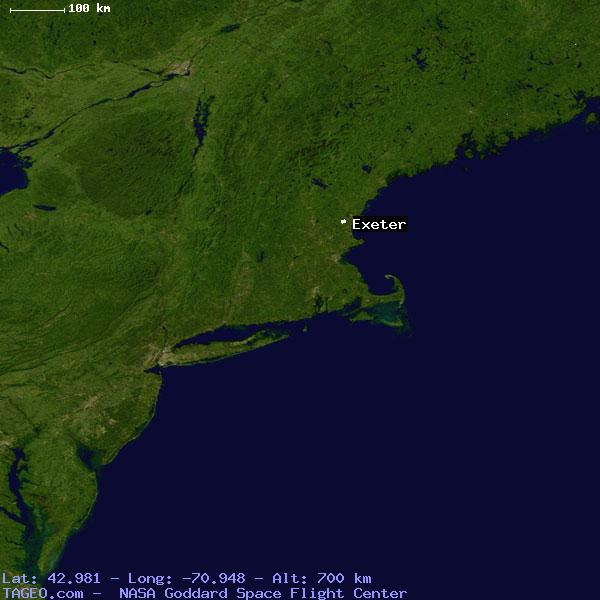 The whole UFO case report:
“Brad Sparks:
Sept. 3, 1965.
11 p.m. Brazoria County Chief Sheriff's Deputies Billy McCoy and Robert Goode saw a triangular object, 150- long, 40- thick at middle and dark grey, with a long, bright, pulsing, purple [violet?] light on the right side and a long blue light on the left side, approach to off highway and in the air. Purple light illuminated ground beneath object and interior of police car, and object cast a shadow in moonlight. Driver Goode felt heat on his left arm and an alligator bite on his left index finger, suddenly relieved of pain and later healed rapidly but unnaturally. They drove away in fear but returned later that night to find object still there. (Berliner; cf. Vallée Magonia 694)

Fran Ridge:
Another case that illustrates the value and need for a chronological database for all sightings of all categories. This occurred on the same day as the incident and is listed as a Project Blue Book Unknown, #9915. We released this report in November (2012) and right after that Dan Wilson located 46 documents! *”

A triangular shaped UFO was observed (in Damon, ) by Brazoria County Sheriff's Deputies Billy McCoy and Robert Goode on 3 September 1965, at 11:00 p.m.: 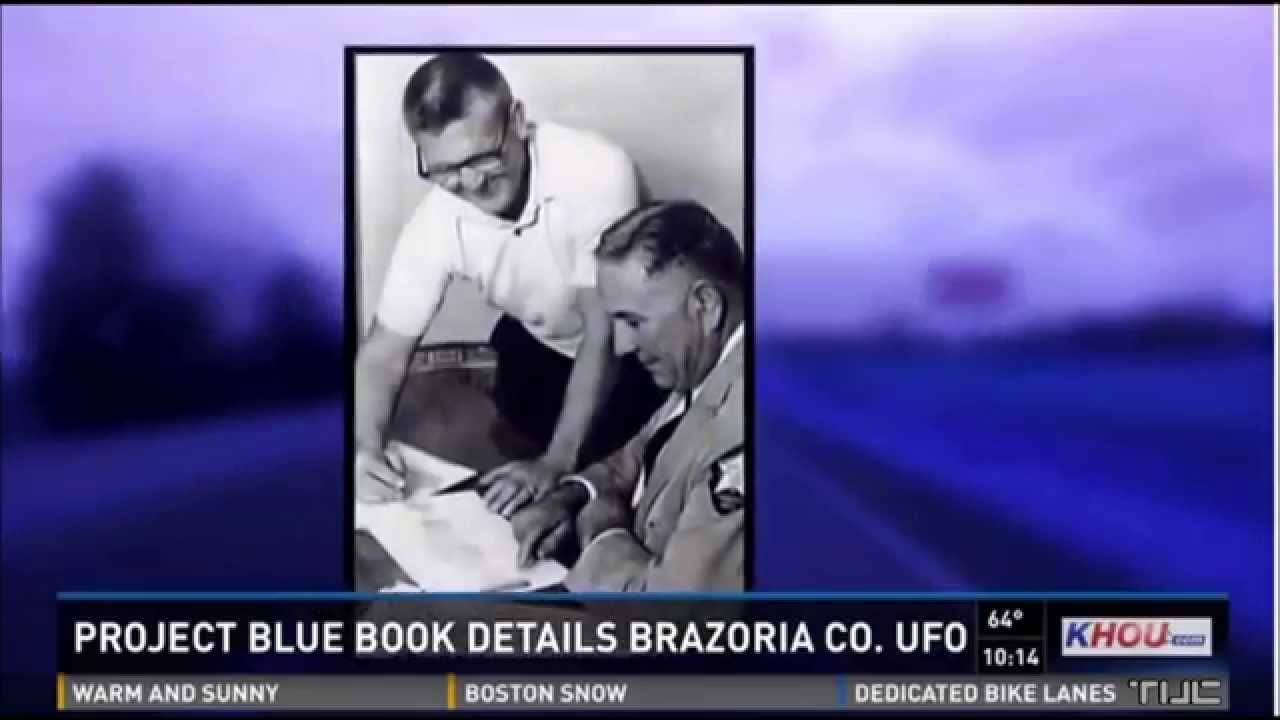