Quote from the article:
“On the 18th of February, 2015 Sasha Pesic, ASA’s Freedom of Information & Privacy Contact Officer/Legal Inquiries Coordinator, asked me if I would grant them an extension of time in searching their database(s) and preparing any found material, which, despite not being famous for my patience, I agreed to. On the 7 May, 2015, I received the results of my request. At one page, in PDF form, ASA supplied me with 3 UFO or related events in table form, which is imaged below.

One case stands out. In June, 1999 two airplanes experienced what, by anyone’s measure, must be considered a potentially important UFO event. In ASA’s ‘Executive Summary’ column it is dryly stated:

‘Pilots of AJP and AJK enroute for Alice Springs sighted an unidentified green object in their vicinity. No details of any other traffic held by Brisbane Sector

In the ‘Description’ column it is stated: 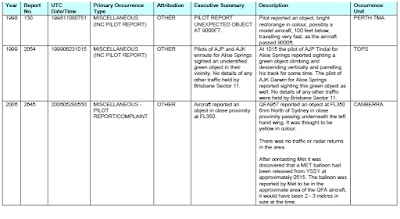