This UFO footage comes from the documentary film,
‘The Shuttle’ by Discovery Channel.

The UFO can be seen at 27 seconds into the video:

The footage shown in slow motion:

The above UFO footage is corroborated by the documentary film, which is found on YouTube. The quality of this video is far inferior to the above video, but if you freeze-frame the footage at 1:23 minutes into the video, you’ll be able to see the UFO:

The name of this NASA mission was STS-51-L. 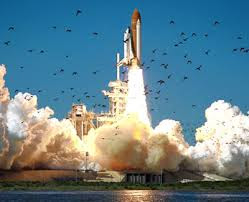 In the course of videotaping and international TV documentaries, reports and news reports – I have found (and video copied) a large number of anomalous flying objects in these TV broadcasts. In this UFO blogspot I will report on UFOs found in TV broadcasts (TV footage). I will also inform about any UFO evidence recorded or obtained b