In my opinion, this is also a very good UFO video. The UFO is small and seems to be oval-shaped. The object, which is very close to the camera, flies towards the building then it turns and flies to the left. The UFO can be seen 41 seconds into the video. Furthermore, a second video showing this incident was found on YouTube, which corroborates the first.

The National Geographic documentary was about the legend of Atlantis.

This is a very good UFO video! The TV show was recorded on 18 May 2007 by the video source. Have you seen a conventional aircraft which looks like this? Or, have you seen a balloon which flies as fast as this? Then, could it be a meteor? Now, wait, doesn’t the object fly in an ascending trajectory? What’s more, one can clearly see that the UFO flies towards the camera. Then, what’s the object in the video? I certainly don’t know!!! The ”Trevor McDonald Tonight” Show is an ITV (UK) production.

A Guatemalan advertising company was filming a car commercial, when a fast-flying UFO suddenly appeared in the skies over Guatemala City. At the moment I don’t know what date it was recorded. I became aware of this UFO footage while viewing a UFO documentary. I found this footage in a UFO footage collection video.

The quality of this footage is far superior in the documentary, but it's easy to see that the flying object isn't an airplane, a helicopter or meteor! The UFO footage in question starts at 2:19 minutes into the video and lasts 10 seconds.

One can clearly see that the camera man swings the camera around to film the UFO.

This footage of a hovering or slow moving UFO, which suddenly accelerates at great speed was filmed by the UK TV channel ITV. The recording was made in Oxfordshire, England, UK in October 1971.

It’s evident that the camera operator zooms in on the UFO. One can clearly see that the UFO isn't debris from the Space Shuttle. The debris falls in a descending trajectory. Furthermore, a trail of smoke is seen behind the falling debris. And as clearly seen in the video, it’s evident that the UFO flies parallel to the ground. The tell-tale sign that the unknown object both is real and flies parallel to the ground can be seen when one freeze-frames the video 15 seconds into it! Then the condensation trail behind the object can be easily detected.

The video source (who's not the videographer) says that the UFO is diamond-shaped. To me the UFO looks disk-shaped with a dome on top and the reason it looks diamond-shaped is because the camera zoom hasn’t been set up properly.

This MiG-21 Lancer (LanceR)/UFO crash was officially confirmed by the Romanian Defence Ministry, as seen in the video. It’s probable that the jet fighter was hit by only one of the UFOs, although 4 UFOs are seen in the official Romanian Air Force footage.

The jet fighter’s canopy was crushed and one of the wings was extensively damaged. The pilot managed to land safely. And, judging by the freeze-framed image, it appears that the unknown objects are triangular shaped.

After a thorough investigation by the Defence Ministry, no one could explain what hit the jet fighter. That meant that no aircraft, meteor, bird, balloon or natural phenomenon was the culprit.

Then only one question remains. Namely – what on Earth hit the jet fighter?!!

The below video (TV news report) shows the damage that was done to the jet fighter.

And – this incident is impossible to dismiss as an example of overactive imaginations at work. The "War" (meaning: strange, unknown and seemingly flying objects fly very close to jet fighters, which then either crash or are extensively damaged), as I mentioned before, apparently hasn’t ended as of 30 October 2007! This footage comes from a genuine World War II film:

This is footage from the Discovery Channel’s mini-series,
“Everest”:

Watch above Bill Crouse’s head 10 seconds into the video. After blowing up the freeze-framed image, it seems that the object is disk shaped or cylindrical shaped. Judging by the movement of the object, it either hovered behind Crouse before ascending or flew in behind him and then took a right angle turn.

Video comment (by YouTube video source): “It starts with showing the Space Shuttle Endeavour's shot of Tokyo, you can clearly see the lights of Tokyo, then as the Endeavour passes over the Japanese Sea the narrator points out some lights...which if he is not mistaken are over the "dark" sea....yeah, there should not be any lights/reflections over the sea. And of course this could not be explained by NASA or mission control.

Then it moves to a shot of the International space station and the right solar panel. Suddenly there is a moving light dot…then the same moving dot is recorded (he claims that the International Space station has a 24 hour camera recording at all times) and then again over the city of Chicago....suddenly NASA cuts the live recording and does not explain the moving dot. He also mentions why mission control didn't focus the camera or zoom in on the moving dot as it passes over Chicago, they cut the broadcast, and he says that NASA never responds to the moving dot/UFO-thing recorded.”

My comment: If it’s true, why hasn’t NASA released this footage in the West? I think the question is highly appropriate! The big light cluster seen after 14 seconds cannot be birds or airplanes, as the Space Shuttle is unable to film either from Space. The video comes from an unknown Japanese TV channel broadcast.

There are three UFO incidents in this video. 1) The light cluster after 14 seconds. 2) The UFO near the solar panel after 47 seconds. 3) The UFO over Chicago after 57 seconds: Video comment (by the video source): The film was taken by a local cable TV camera man in 1995 and it was broadcast on a special TV show the next month in South Korea.

My comment: This is, in my opinion, an excellent UFO video. Furthermore, this is not a UFO video hoax, as it was made by a South Korean TV camera man, while another TV camera man films the UFO filmographer. I don’t know when (date) the UFO film was recorded. And, I haven't managed to find the number 2 video on the Web.

The UFO video shows what looks like a merger or an ejection between the UFOs, involving what seemingly looks like three UFOs. One of the UFOs is much larger than the other two! Films of UFOs merging or ejecting smaller UFOs are few and far between, something which means that this film is very interesting. 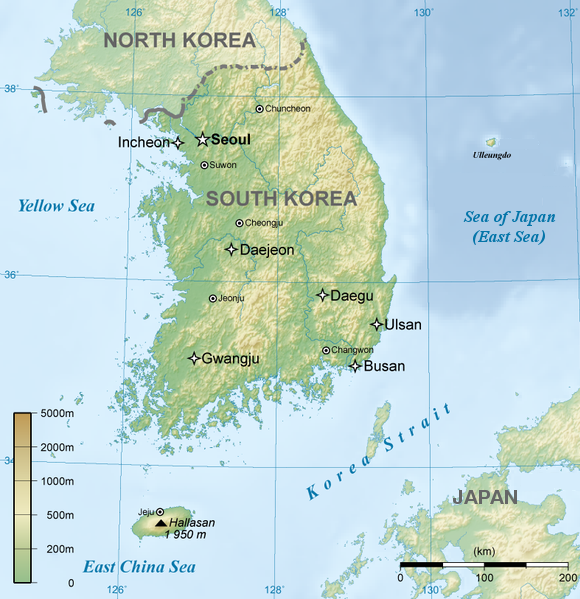 This is the sixth (!) “Jet Fighter versus UFO(s)” video and/or article on this blog. And, that’s only from real TV broadcast footage!

This video that shows a British Tornado jet fighter being shadowed by a UFO is something else and almost on a par with the BBC UFO footage video posted previously!!! The UFO looks to be triangular shaped. One thing I noticed was that several times when the film "jumps", one can clearly see that the effect is that the jet and the UFO do the same "movement" (the objects don't move, it's the filming jet fighter that moves). As I've heard video experts explain this phenomenon before; this effect supports the fact that this is, with an almost 100% certainty, an object that flies behind the jet fighter. You see this effect best when the clock shows 1:42, below the video.

This video was added on LiveVideo.com on 22 January 2008. I don’t know when this video was made. This documentary is called, ”Wings over the Gulf”. It’s very highly likely, then, that this footage was made over Iraq during the current war. The film is made by the Military Channel, UK.

To further elaborate on this video, I will mention that this is the third (if you count the BBC jet fighter footage of the two UFOs over Syria/Israel) UFO video from the current Iraq War on this blog. Without saying where the UFOs come from and/or what they are - it certainly looks as if someone or something is interested in what’s going on! And, one thing seems patently clear; if you want to see a UFO up close, become a fighter pilot! But - you should definitely practice the catapult ejection extensively it seems.

This is the most famous alleged UFO footage from NASA TV in history.

This case involves (seemingly) several UFOs. But most of the reports about this case concentrate on the main object. When one looks at the whole video, one clearly sees that the main UFO ascents through the atmosphere and then continues its flight a short distance above it.

Then we see a flash of light at the lower left of the screen. A fraction of a second after the flash, we see the main object, together with the others, accelerate away sharply. Shortly thereafter, a streak of light moved through the space where the main object had flown, before it sharply changed its course.

Dr. Jack Kasher, professor emeritus of physics at the University of Nebraska at Omaha is the foremost expert when it comes to this case. According to him, this UFO case has, once again, brought forth clear evidence of UFOs flying in the Earth’s atmosphere and in Space.

Furthermore, Dr. Kasher is of the opinion that some organisation on the Earth might have fired some sort of hi-tech weapon at the UFO. In this video, Dr. Kasher is supported by former U.S. astronaut, Dr. Edgar Mitchell, who says that there have been many credible UFO sightings and that UFOs should be studied more closely!

Discovery flew over Australia when this UFO incident played out.


Without starting a new conspiracy theory, it’s none the less interesting that the U.S. government has a top secret U.S. Military facility in Pine Gap near Alice Springs, Australia. Officially, the facility is called the Joint Defence Space Research Facility. A lot of U.S. Military experts believe that this facility is the largest ECHELON ground station in the world. And, Pine Gap is physically and operationally similar to the signals intelligence facilities at Buckley Air Force Base, Colorado and Menwith Hill, United Kingdom. U.S. government personnel at Pine Gap are believed to be mostly from the National Security Agency, subordinate service-associated agencies and the Central Intelligence Agency.

The pre-eminent expert regarding this facility is Professor Des Ball from the Australian National University. He described the CIA-run facility as the ground control and processing station for geosynchronous satellites engaged in signals intelligence collection. Professor Ball says that since 9 December 1966, when the Australian and U.S. governments signed the Pine Gap treaty, Pine Gap has grown from the original two antennas to about eighteen in 1999. The biggest expansion occurred after the end of the Cold War.

And, why did NASA stop its live broadcasts after this particular Space Shuttle Mission?!

This is the full length original STS-48 footage from NASA TV (below).

Below is another NASA TV video showing authentic UFO footage during the STS-48 Space Shuttle Mission. Watch the UFO which enters the lower part of the screen 8 seconds into the video. The UFO flies in a curve to the right. Once again – no space debris does that!

Here is one more STS-48 UFO video from NASA TV footage (below).