https://www.google.com/search?num=100&q=“Air+Force+Pilots”+site:nuforc.org
(“Air Force Pilots”) (no results as of 5 June 2019)
(My comment: The 5 March 2004 Mexico UFO incident has been fairly well resolved to be oil rig burn off flares.)

Fran Ridge:
Nov. 14, 2014; from , into Pacific
Daytime. Two F-18 Hornets alerted to UFO in Pacific that had been dogging the USS Princeton for two weeks. F-18’s tried to intercept and object dove from to 20,000' and hovered over ocean and either dropped out of radar range or shot straight back up. The radio operator on the USS Princeton instructed Commander Fravor and Commander Slaight to investigate. The two fighter planes headed toward the objects. The Princeton alerted them as they closed in, but when they arrived at ‘merge plot’ with the object, so close that the Princeton could not tell which were the objects and which were the fighter jets, neither Commander Fravor nor Commander Slaight could see anything at first. There was nothing on their radars. Then, Commander Fravor looked down to the sea. It was calm that day, but the waves were breaking over something that was just below the surface. Whatever it was, it was big enough to cause the sea to churn. Hovering above the churn was an aircraft of some kind, whitish, that was around long and oval in shape. The craft was jumping around erratically, staying over the wave disturbance but not moving in any specific direction, Commander Fravor said. The disturbance looked like frothy waves and foam, as if the water were boiling. Commander Fravor began a circular descent to get a closer look, but as he got nearer the object began ascending toward him. It was almost as if it were coming to meet him halfway, he said. Commander Fravor abandoned his slow circular descent and headed straight for the object. But then the object peeled away. ‘It accelerated like nothing I’ve ever seen,’ he said in the interview. He was, he said, ‘pretty weirded out.’ The two fighter jets then conferred with the operations officer on the and were told to head to a rendezvous point away, called the cap point, in aviation parlance. They were en route and closing in when the radioed again. Radar had again picked up the strange aircraft. ‘Sir, you won’t believe it,’ the radio operator said, ‘but that thing is at your cap point.’ ‘We were at least away, and in less than a minute this thing was already at our cap point,’ Commander Fravor, who has since retired from the Navy, said in the interview. By the time the two fighter jets arrived at the rendezvous point, the object had disappeared. The fighter jets returned to the Nimitz.  (CBS News, New York Times, Washington Post)

Robert Powell:
I have been sending FOIAs on the Fravor/Navy incident since Dec 2016. I am still appealing FOIAs. I consider this a very strong case. I’ve attached some preliminary data that you may have.” 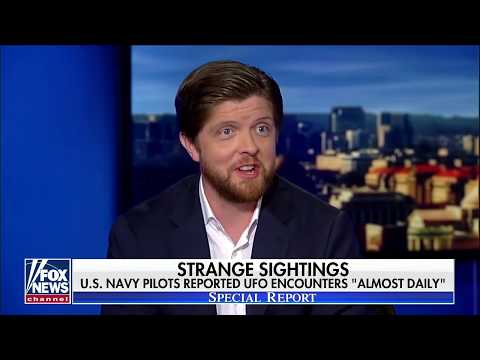