While Gerald R. Ford (38th President of the United States) was a Representative for Michigan and U.S. House of Representatives Republican Minority Leader he sent a letter (dated 28 March 1966) to the chairman and the ranking Republican members of both the House Armed Services Committee and House Science and Astronautics Committee, urging that one committee or the other investigate the subject of Unidentified Flying Objects. And the House Armed Services Committee (89th Congress, 2nd Session) held a Congressional Hearing on UFOs on 5 April 1966 as a result of Gerald R. Ford’s efforts.

Gerald R. Ford had become involved in the UFO issue because many residents in had sighted UFOs during the first months of 1966. 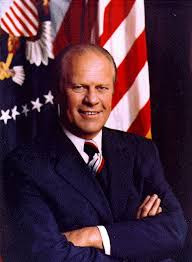 The article reports on the UFO research work of resident John Lutz:

Quote from the article:
“On a cold, crisp night last December, the phone rang at a suburban police station. The caller told officers he had just seen something strange in the sky.

The man said the thing was a dullish red color when he first spotted it, then it changed to blue. About the time the object changed color, he said, his car started running funny.

Twenty minutes later, a second man called . Traveling in the same area of as the first caller, he said he had seen something that looked like a rocket sitting in a field.

As he watched, the thing rose from the ground and took off, he said.”

Lutz also mentions a February 1978 (near ) airplane crash that could possibly be UFO related.