I have previously written a number of times about the former Australian Department of Supply and files which it held on UAP; and the 1971 ANZAAS UAP symposium.

researcher Bill Chalker, included images of an internal Department of Supply memo, on his blog, which was of great interest to me.

In view of this interest, I have transcribed the text of the memo below. I will then provide some comments about the contents, and the broader context.

This is an internal memorandum to Mr T F C Lawrence, Deputy Secretary, Research and Engineering, Department of Supply, from  C N Gerrard, Radar and Electronic Tracking Group, dated 2 December 1971. The subject was ‘Regarding recent symposium on UFOs.’

3. The general feeling of those present was that there is a residue of sighting reports which indicate that some strange phenomenon exists; and that this warrants scientific investigation.” 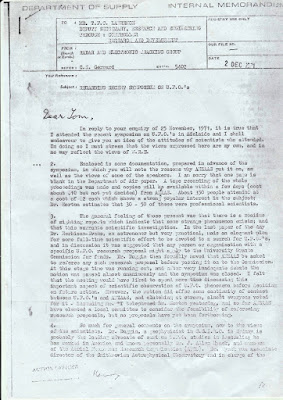