Quote from the article:
“In a post dated 1 September 2016, I mentioned one outcome of a 2004 Freedom of Information Act (FOIA) request to the Australian Department of Defence (DOD). This was, that in asking for a copy of numerous UAP files, they had advised me that one file, numbered AF84/3508 was unable to be located. Over the years since then, it never did turn up. Until now.

Recently, Melbourne researcher Paul Dean, forwarded me the results of one of his FOIA requests to the DOD. Among the various chains of internal back and forth emails responding to Paul’s request, I noted a reference to the long lost file. In November 2015, the file was stated to have been renumbered as 2007/1008750 and was then held at the DOD archives.” 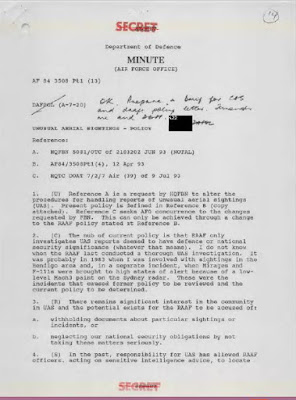