It was the TV station Fox 8 News who filmed this UFO, which seems to be spherical shaped:

Numerous viewers have sent in e-mails regarding a story by Fox 8 reporter Belinda Prinz. However, the e-mails have nothing to do with the story she reported on. They have to do with a mysterious object that appears in one of the camera shots. Watch the video above and vote in our poll to the left. (Do you think that the object in the video above is a UFO?) If you don't think the mystery object is a UFO, let us know what you think it is by commenting in the message board below the poll. (To watch viewer reaction, click on the related link titled ‘Viewer Reaction to Mystery Object.’ To watch Belinda's original story, click on the related link titled ‘Cleveland Casting Call.’ Both links are located below the message board.)” 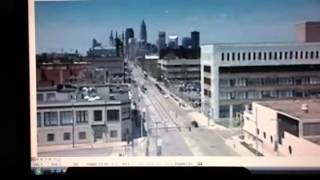