“They are in no doubt, the boys from Hovsherad. They've seen a real UFO. The size of a helicopter, with flashing lights like on a road system, sailing at low altitude, mostly in an east-west direction across the valley floor. The light phenomenon lasted over Eik for three hours on Thursday night [8 November 1990].

– On Friday, the UFO was the big topic of conversation at the school. The boys telephoned to Oslo and many airports. They talked to the Earth station at Eik. Got only negative answers. No one could give a natural explanation for the phenomenon. There were no planes in the area, there was no helicopter. Nor northern lights. Station Manager Åge Byrud rejects that the signals between the Earth station and the 36 square metre 'mirror' at Bjødntødnan, the mountain where the UFO orbited several times, can be visible by ionizing the air or reflecting from ice crystals. It was namely between the mirror and the area by the Earth station on the Kjørmo that the UFO appeared several times. It went fastest when the lights were off, a little slower when they were on. It shone and flashed in white, blue, green and red. They could hear no sound. The UFO changed direction as the boys have seen in cartoons. Judging by the contours, the UFO looked like a flying saucer.

– I saw it at home from Eik, my friend, Erik Sporkland Surdal saw the UFO from the slopes up to Kjørmo, says Tor Magne Jendal who first told the others what he had seen. Several of the sixth graders saw the UFO, and they insist that they are sane and do not fantasize. An adult balanced jogger from Moi also saw the phenomenon in the sky over Hovsherad this late autumn Thursday evening.

– We think this is interesting, we will probably look more towards the sky after this. We had a bit about UFOs last year at school, but have not been particularly interested in it. We [are] not 'crazy' to experience such observations. We have written down what we have seen independently of each other. Now we wonder if we will ever get an answer to what we have seen, say the three Agder met who could tell what they had experienced on Thursday. They have seen similar light phenomena before in Hovsherad, but not as carefully and for as long as Thursday. The observations were made between 17:30 and 20.” 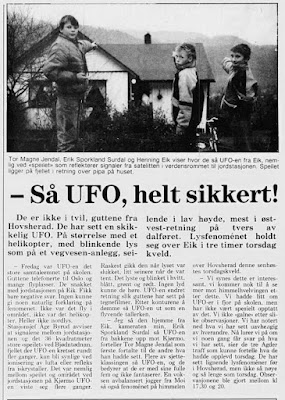 “Tor Magne Jendal, Erik Sporkland Surdal and Henning Eik show where they saw the UFO from Eik, namely at the 'mirror' which reflects signals from the satellite in space to the Earth station. The mirror is located on the mountain in the direction above the chimney of the house [photo text]."